We all know that house painting is a very important activity and people can be quite excited to spruce their homes up. One can just buy a can of paint and a couple of brushes and already start painting walls. If eager homeowners are not careful, though, they can easily find themselves along the ranks of failed painters, such as this old lady who made headlines for all the wrong reasons a couple of years back, following a botched paint restoration job. 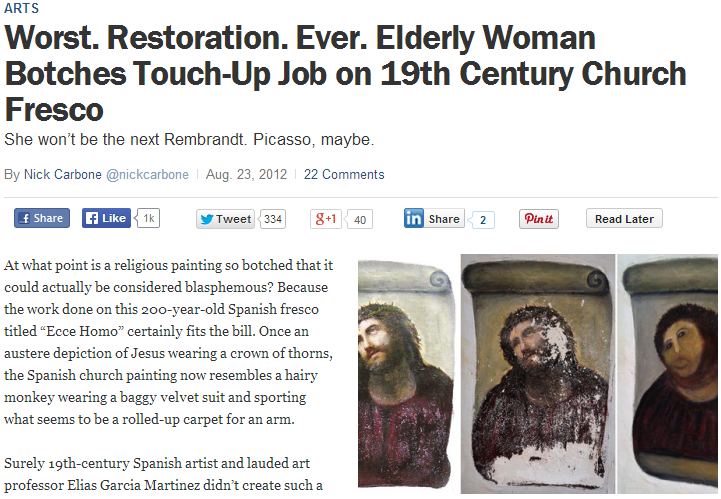 “The touchup, they concluded, was done by a church neighbor who was displeased with the way the “Ecce Homo” fresco had aged. Years of exposure to heat and dust had left whole sections washed away, as the middle image above shows. Art restoration is a touchy, time-consuming process, and Cecilia Gimenez, an octogenarian neighbor of the church, evidently thought she could do better.

So, “without asking anyone’s permission,” but having the best of intentions, she tried her hand. She ultimately turned herself in, according to local culture councilor Juan María de Ojeda who spoke to Spain’s El Paisnewspaper. She admitted to town administrators that her self-restoration would probably not be too well-received. Even the note she left to accompany her free labor alluded to her rush job: “This is the result of two hours of work,” it read, according to El Pais.”

Granted, not a lot of homeowners would have fresco paintings in their living room, but regardless, botched painting projects can still happen. Avoiding all forms of painting disasters, however, can be done if people get the services of professional Knoxville, TN painters in the first place.

Hiring professionals to do the house painting is the best decision as they have the necessary knowledge and skills to do jobs. You can leave up to them various paint jobs, like touching up fading walls or even drastically changing the house color from something neutral, like beige, to something with a whole lot more character, such as the Golden Gate Bridge’s shade, international orange. They would also call the attention of homeowners to relevant local laws and homeowners association rules that may affect the execution of the painting job.

If you want to save on resources, the right (and only) way to do house painting is to always do it right the first time. Knoxville painters, such as Regal Painting, offer homeowners peace of mind as chances for mistakes and dissatisfaction are slim to nil. Most importantly, homeowners can definitely be sure that the resulting work won’t be an epic failure, giving them their money’s worth.